Timely and Relevant News: Why Evergrande Isn't The Next Lehman Brothers

Chinese property developer Evergrande’s liquidity crisis has sparked fear and massive selling in Chinese property stocks over the past several weeks. The big question is could this be the first domino to fall, sparking a systemic risk scenario, similar to when Lehman Brothers went under 13 years ago this week? The good news is we don’t think so based on our thoughts outlined below.
With more than $300 billion in liabilities, Evergrande is currently the world’s most indebted real estate developer. Worries are mounting that starting next week it won’t be able to pay interest due (according to Bloomberg), along with potentially missing a principal payment on at least one of its loans.
With Evergrande’s share price down more than 80% this year, investors are clearly voting with their pocketbooks, while the chart below shows the pressure its dollar bonds have been under as well, at deeply distressed levels to the tune of 28 cents on the dollar recently. 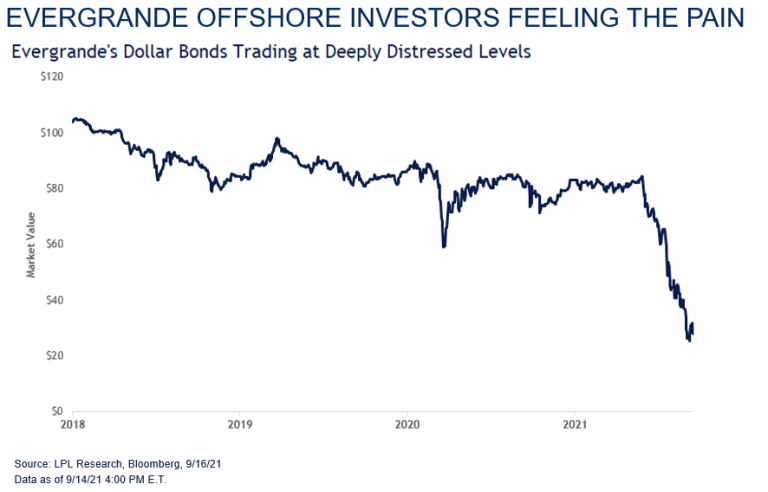 Multiple downgrades have happened the past two weeks and some rating agencies are noting that an outright default is probable. Should this happen, what could the fallout be? With 1,300 real estate projects in 280 cities in China, could China’s government intervene to avoid a messy default? So far that answer has been a resounding no, with the company instead looking to banks and other creditors to help the impact of a default.
The bad news keeps coming - Evergrande suspended trading of its onshore corporate bonds, after yet another downgrade - taking it one step closer to restructuring or default. So is Evergrande China’s version of Lehman Brothers?
Here are three reasons we don’t think so.
“Although the impact from Evergrande’s liquidity crisis is enormous, the good news is the fallout hasn’t started to spillover to other markets,” explained LPL Financial Chief Market Strategist Ryan Detrick. “Short-term funding markets are acting just fine in China thus far; remember, it was the money markets in the U.S. that first started to show cracks in the system in early 2008, well before the wheels fell off.”
As shown in the chart below, China’s money markets aren’t showing any signs of systemic risk. These tend to be the canary in the coal mine and the fallout appears to be fairly contained as of now. 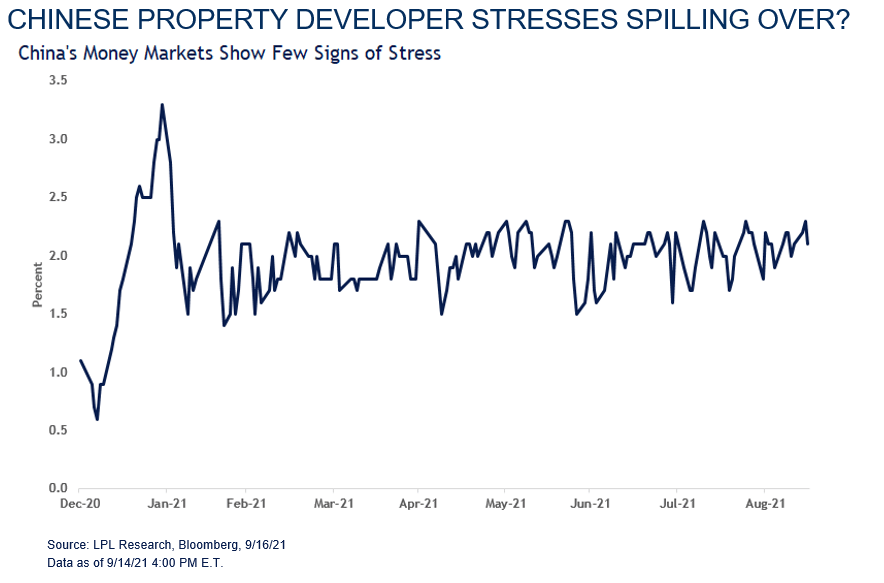 This is a very fluid situation and one that could change. Although the Chinese government has avoided helping Evergrande so far, we think the odds do favor some type of eventual bailout to limit the ripple effect from a potential default.
We have been saying in recent months, including during ourMid Year Market Outlook that a pickup in volatility would be normal at this stage of a strong bull market. We think suitable investors may want to consider "buy the dip" opportunities as they arise. We will continue to closely monitor action in the short-term lending markets as the current situation evolves. It is important to not lose sight of your long-term goals and to maintain your perspective in the midst of market ups and downs.
If you have specific questions related to your own investment strategy or financial planning needs, we welcome you to call us at 302.234.5655 or email us at contactus@covenantwealthstrategies.com to set up time to discuss further.
Disclaimers:
This material is for general information only and is not intended to provide specific advice or recommendations for any individual. There is no assurance that the views or strategies discussed are suitable for all investors or will yield positive outcomes. Investing involves risks including possible loss of principal. Any economic forecasts set forth may not develop as predicted and are subject to change.
References to markets, asset classes, and sectors are generally regarding the corresponding market index. Indexes are unmanaged statistical composites and cannot be invested into directly. Index performance is not indicative of the performance of any investment and do not reflect fees, expenses, or sales charges. All performance referenced is historical and is no guarantee of future results.
Any company names noted herein are for educational purposes only and not an indication of trading intent or a solicitation of their products or services. LPL Financial doesn’t provide research on individual equities. All information is believed to be from reliable sources; however, LPL Financial makes no representation as to its completeness or accuracy.
All index and market data from FactSet and MarketWatch.
This Research material was prepared by LPL Financial, LLC.