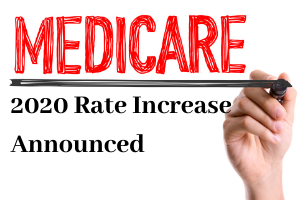 By law, the Centers for Medicare and Medicaid Services (CMS) must pay the average sales price for drugs administered as well as pay the prescribing physicians a percentage of the sale price.

According to the CMS press release, an effect of this practice is that drug companies are incentivized, "to set prices higher and for physicians to prescribe more expensive drugs because that leads to a higher Medicare payment."

For higher-income beneficiaries, Medicare Part B and Part D drug premiums plans costs are set to increase as well in 2020 in the form of IRMAA surcharges.

IRMAA (income-related monthly adjustment amount) is a higher premium charged by Medicare Part B and Medicare Part D to individuals with higher incomes.

Notably, for the first time in nearly a decade, the income brackets that establish surcharge amounts will account for inflation starting in 2020.

For example, beginning in 2020, the lower income limit for IRMAA surcharges will increase for individuals by $2,000 up to $87,000 and up $4,000 to $174,000 for married couples. As a result, the adjustment for inflation may actually cause households to drop into lower surcharge brackets.

2020 IRMA income brackets and monthly premiums are shown in this chart:

How to Plan for Medicare Cost Changes

If you or a loved one will be impacted by the upcoming cost increases for Medicare and Medicaid, contact us to start a conversation about how to adjust your retirement strategy to minimize any detriments!